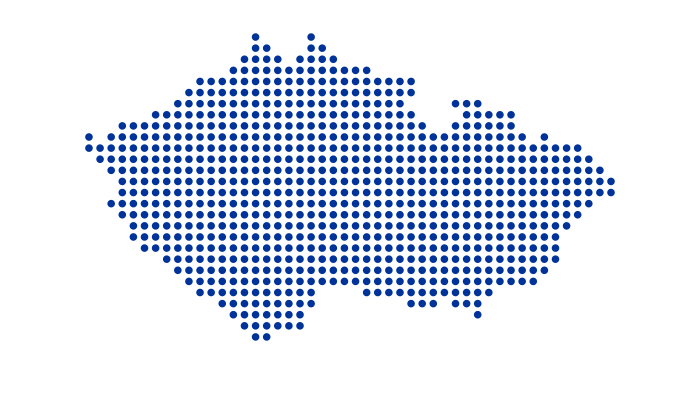 The Czech Republic adopts a form of legal separation where Ceska telekomunikacni infrastruktura (CETIN) is the sole national telecommunications infrastructure provider. In 2015, CETIN and the transformed O2 started to operate as two separate providers that carry out, in different roles, the business of the previously vertically integrated incumbent O2 Czech Republic (O2).

CETIN and O2 are two companies, independent from each other. However, since both companies (CETIN and O2) still have the same owner (PPF group), this is not in strict terms full structural separation. Neither can CETIN be considered as a wholesale-only operator, as defined in article 80 of the EECC, because CETIN and O2 are controlled by the same ultimate owner.

PPF is an international holding company based in the Netherlands. PPF has 100% ownership of CETIN and 85% of O2.

O2 is a retail-only provider, without any fixed infrastructure but with spectrum licences and mobile exchanges. The declared objective of the legal separation was to enable greater retail pricing flexibility for O2.

Although CETIN is the newer company established in 2015, it was O2 which was legally separated from the PPF group.
The table below lists the main steps in the development of the current organisational and governance structure..

While the ultimate ownership of both CETIN and O2 is held by PPF group, each company has a separate ownership structure within the holding company, with distinct reporting lines. The major shareholders of O2 are: PPF Telco BV, PPF A3 BV, and PPF Cyprus Management Limited. CETIN is owned by PPF Infrastructure BV. The Czech situation thus differs from other countries, for example in the UK, where BT has direct ownership of Openreach. 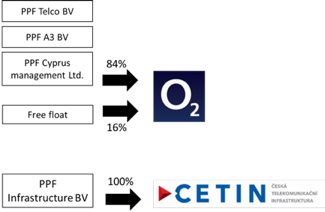 According to PPF, CETIN and O2 have different business strategies which would be incompatible in a single company. PPF sees CETIN as a strategic investment, while it considers O2 as a financial investment. Therefore, the company structure (the separation) results from PPF´s decision to differentiate its investments between strategically important long-term assets (CETIN) and medium-term financial assets (O2).

In 2015, the Czech NRA imposed EoI and KPIs on CETIN as a result of market analyses undertaken before the separation, when O2 was the vertically integrated provider. The NRA was under pressure to complete the market review because its analyses of markets 3a and 3b had been pending since 2010, with two previously withdrawn notifications to the European Commission.

However, in 2018, the NRA removed the 2015 EoI and KPIs remedies in its fourth round review of markets 3a and 3b, introducing instead a more general obligation of non-discrimination. The NRA was required to undertake this fourth round market review due to the voluntary legal separation of the former SMP operator.

The NRA removed its previously imposed remedies on the grounds that CETIN, as a wholesale-only provider, has a business reason to treat all telecoms operators equally, and has no retail customers. However, it imposed a more general obligation of non-discrimination in market 3b, with the aim to ensure the fair treatment of access seekers and to avoid the possibility that CETIN could set different prices for different access seekers with the intention of favouring O2.

This general obligation of non-discrimination is supervised in practice by the NRA (state inspection) without using specific KPIs. The inspector has wide discretion to monitor systems and interview employees when performing the inspection. For market 3a, the general non-discrimination obligation is supplemented with an economic replicability test between the services provided in market 3a and in market 3b.

Before CETIN started operations in 2015, it had developed a new ordering system for all wholesale partners, with no special provisions for O2. As a result, all wholesale partners have identical information about the current status of the CETIN fixed network, on plans to increase network capacity, or on their orders.

CETIN developed two interfaces to its system. A web-based interface for small (regional) partners who cannot invest in expensive IT systems, and a direct interface for large operators who adapted their systems to CETIN. Only the interfaces are different, not the information provided through them.

The regulated reference offer (mass market offer) in market 3b works with a volume and time commitment discount scheme. The three national mobile operators (O2, T-Mobile and Vodafone) are three of the top-tier wholesale partners of CETIN, followed by around 15-20 smaller wholesale partners.

CTU started the fifth review of the wholesale broadband markets in September 2020, with outcomes expected in Q2/2021. Normally, the regulator consults on draft analyses which outline possible remedies that the regulator is considering imposing on the SMP.