The main NGA networks in Germany are the upgraded copper network (FTTC) of the incumbent operator Telekom Deutschland and cable networks (hybrid fibre-coaxial, HFC). Germany has only minor FTTH/FTTB deployments.

The German federal government and the 16 federal states have been offering various forms of public funding to increase broadband coverage in underserved (typically rural) areas.

These state aid programmes were mainly based on the federal government’s target to cover 100% of households (HH) with at least 50 Mbps. This requirement could be fulfilled with any NGA technology, even with Telekom’s original rollout of FTTC+VDSL without vectoring.

A recent €12bn state aid programme, which has just been approved by the European Commission, will support the deployment of gigabit broadband speeds in areas not yet covered by 500 Mbps (download) or 200 Mbps (symmetric).

In Germany, service-based competition builds on a large number of operators that buy regulated services from Telekom. In addition, Germany has significant infrastructure-based competition, in particular driven by

The dynamic infrastructure competitive environment is well illustrated by the different industry associations operating in the telecoms sector:

The German regulator was established in 1998 as regulatory authority for telecoms and post (RegTP) and later also became responsible for energy and railways. Since 2005 it is known as Federal Network Agency (BNetzA). Bundeskartellamt is the German competition authority.

The decision on regulatory obligations usually defines the remedies in only one or two pages. Details are regulated in separate procedures to approve reference offers and procedures that set wholesale prices. These procedures do not follow the same time cycles as the market analyses.

The current regulation of markets 3a and 3b/2014 takes account of Telekom’s migration to an all-IP network based on VDSL2 vectoring. Two major decisions of BNetzA from August 2013 and September 2016 defined rules that allowed Telekom (and under certain conditions also other operators) to deploy vectoring but required the provision of a new layer 2 bitstream product.

Telekom developed the product Layer 2 Bitstream Access (L2-BSA), which became operational at the end of 2016 with some final decisions on reference offer and wholesale prices in July 2017.

Most access seekers are now using the so-called contingent model. This model allows discounts on the monthly fees for operators that commit to buying a larger contingent of L2-BSA and/or IP-BSA access lines over a period of eight years by making an upfront payment. Telekom introduced the contingent model in 2012 in parallel to its network upgrade to FTTC+VDSL2 vectoring, which is now completed. The contingent model gave access seekers an incentive to migrate their customer base from the legacy network to Telekom's new network, in particular to migrate from physically unbundled local loops to the new bitstream product L2-BSA (with local handover) or to IP-BSA (with regional/national handover).

A new round of market analyses is ongoing and will change the delineation of markets 3a and 3b/2014. L2-BSA will in future be treated as a substitute to other forms of local access in market 3a/2014, no longer as a sub-market of market 3b/2014. 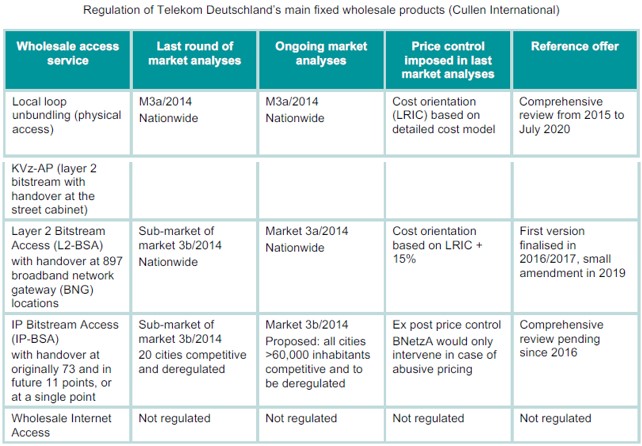 BNetzA has largely completed the steps of market definition and SMP assignment and will now have to decide on the remedies to be imposed on Telekom in the two markets, in particular to what extent Telekom’s FTTH network will be regulated.

In July 2019, BNetzA published key points on the planned new remedies in market 3a/2014.

According to this document, BNetzA would largely maintain the detailed regulation of Telekom’s copper network but would only impose a lightweight set of remedies for the FTTH network, maybe only with obligations of non-discrimination and transparency.

The current regulation theoretically obliges Telekom to provide access to its FTTH network, but this has never been enforced in practice. There is no fibre unbundling in Germany, no L2-BSA over FTTHand the regulated IP-BSA reference offer does not include FTTH.

Telekom and Telefónica announced in October 2020 to extend their commercial agreement to FTTH, which will allow Telefónica to buy IP-BSA over FTTH. The agreement should become operational in spring 2021. Telekom announced to offer such access also to other interested operators. It remains to be seen whether other operators like 1&1 and Vodafone will be satisfied by that voluntary offer or will ask BNetzA for some regulatory intervention.

Cable networks have never been regulated by BNetzA but Vodafone committed in merger control proceedings to offer bitstream services to Telefónica and the cable network operator TeleColumbus (which covers about 6% of households) recently signed a commercial agreement with Telefónica.
Both bitstream services will become operational in the near future.

There is no separation of the incumbent operator. Telekom Deutschland is vertically integrated and provides all fixed and mobile services of Deutsche Telekom group in Germany. The internal organisation of Telekom Deutschland has never been an issue of telecoms regulation.

Most of BNetzA decisions that imposed regulatory obligations after conducting a market analysis also imposed a non-discrimination obligation. However, the wording of these obligations is usually very short.

The decisions on markets 3a and 3b/2014 which are currently in force say that contractual agreements on access must be “based on objective rules, comprehensible, and must provide equivalent access that can be compared, in terms of functionality and price, at least to the form of access that [Telekom] grants itself – even though it could be based on different systems and procedures”. The agreements must also meet the principles of equality of opportunities and equity.

The abovementioned two decisions also oblige Telekom to provide monthly KPIs on ordering procedures, provision of service, service quality (including faults), fault repair times and migration from one regulated wholesale access service to another. However, BNetzA did not specify the KPIs in detail but only says that they must allow to verify whether Telekom complies to the non-discrimination obligation. Telekom is not obliged to publish the KPIs but only makes them available to BNetzA and access seekers.

BNetzA has never imposed non-discrimination based on EoI and always found EoO sufficient.
BNetzA’s document of July 2019 on future remedies in market 3a/2014 does not propose to change this with regard to Telekom’s copper network but raises the question whether future regulation of Telekom’s FTTH network should be based on EoO or EoI.
In practice, the existing regulation of Telekom’s reference offers for access to the copper network has resulted in changes that have become very close to EoI.

This is the result of active participation of alternative operators and their associations in the lengthy procedures to approve new reference offers. BNetzA conducts several rounds of consultations and public hearings before approving a new reference offer.

With regard to price control, BNetzA has always relied more on bottom-up cost models and on own analysis of Telekom’s top-down cost accounting data than on economic replicability tests (ERTs).

There are detailed descriptions of the cost models (developed by WIK) but there is no similarly formalised ERT.

Wholesale prices for local loop unbundling are regulated in much detail based on BNetzA’s established cost model for the access network.

When BNetzA regulated the prices of L2-BSA for the first time, it used LRIC from the bottom-up cost model but allowed to add up to 15%. BNetzA then conducted several price squeeze tests (comparing L2-BSA to flagship retail products) and margin squeeze tests (comparing L2-BSA to other wholesale products) but those tests did not require any further adjustment of prices.

Generally, price squeeze or margin squeeze of broadband offers has not been an issue in German regulatory practice. Telekom does not use aggressive pricing for its mass-market retail broadband products. BNetzA intervened only in a few narrowly defined cases. For example, BNetzA required amendments to Telekom’s first VDSL “contingent model” discount scheme in 2012 due to margin squeeze between that discount scheme and the regulated wholesale prices.